How to create a store locator app using Vue.js, Cosmic, and Google Maps

This little application can be used to allow users to search, and locate your stores. If stores are not relevant to your business, you can it to locate your offices, branches, warehouses… or whatever your business is into. To make this work you need to define a list of your locations that the user can find and locate.

Using Cosmic can saves you a lot of time, because it will allow you to store your data, and also have a REST api ready without any extra coding. For the purpose of this app I used the following features of Cosmic: 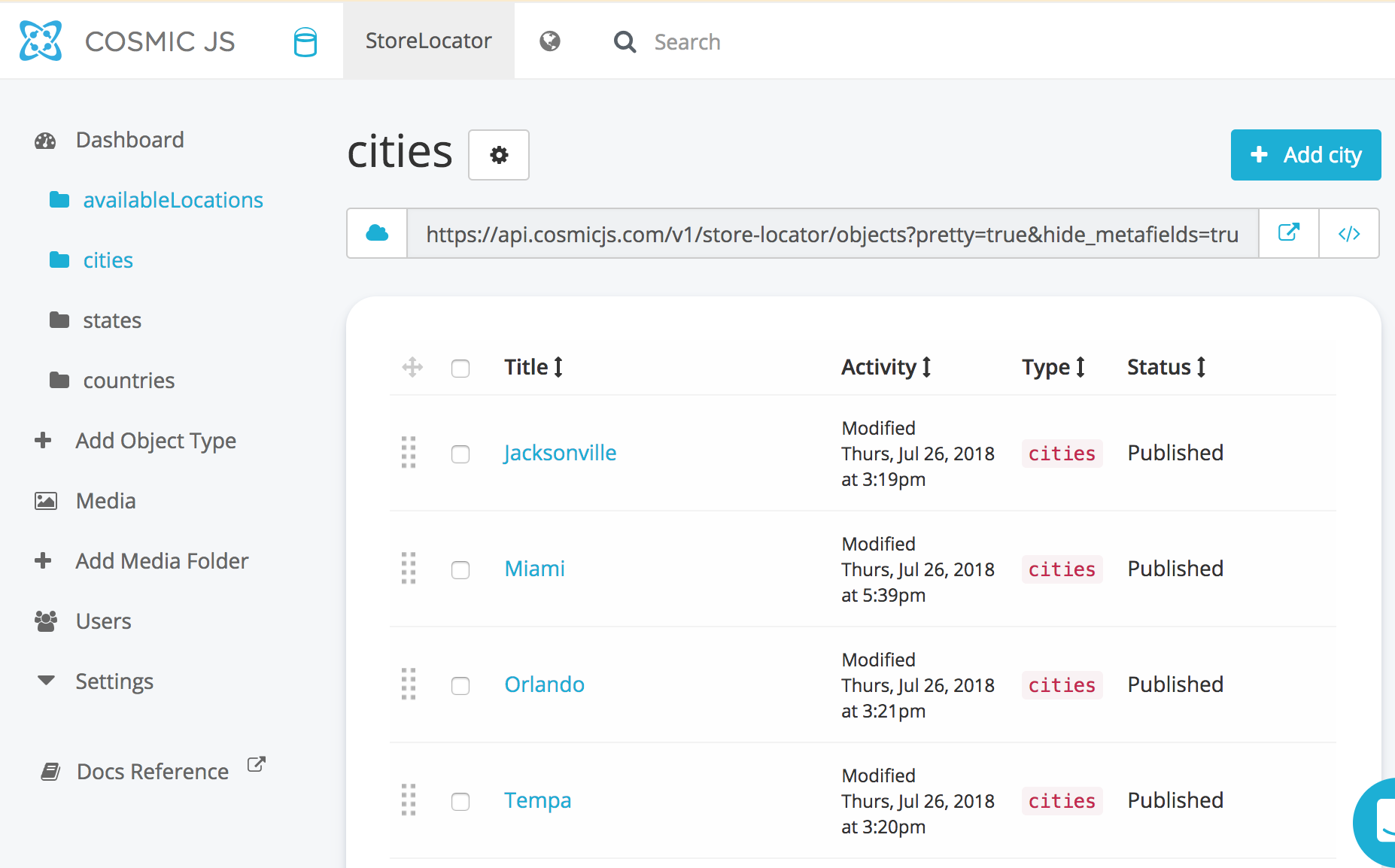 Cosmic dashboard — adding cities where your store is available

The vue application will have two major components:

You can easily build the application layout with vuetifygrid system without the need to write a lot of css.

We need to call Cosmic rest api when the application is created to fetch cities which will be used in the search. So in the code below two things are worth mentioning. First we are initializong VueGoogleMaps component with the GOOGLE_API_KEYwhich is provided from google api console. Second we are calling this.$store.dispatch('fetchCities')to populate the availableLocations on the vuex store file. We can also call this.$store.dispatch('fetchStoreCardImages')that will call Cosmic REST api to fetch all images stored within the Media folders.

This is the code to call to configure Cosmic REST API. You can get the Api read, and write keys after you sign up, and add your Bucket.

The Bucket is the root container for all data, files, images for your app.

In the code below as you can see in the fetchCities action we call Cosmic api to select all objects of type cities and loop through the result array and create another object to populat the store availableLocations variable which in turn will be used in the SearchPanel component to display a list of available locations.

Also in very similar way we can call Cosmic REST Api to fetch images and store them in Vuex store using Cosmic.getMedia(...)

To display a map, I have used vue-googlemaps component, which is an easy to use Vue component that acts like a wrapper around Google Maps Javascript API. In order to draw a map, you need to provide the mapCenter point which is a geocode of a specific location. For instance Orlando center downtown have the following geopoint {latitude: 30.325974,longitude: -81.660454}. Also to draw a marker on the map that represents a store or a special location, you need a geopoint, a title, and an icon. For the purpose of this application I stored the geolocation of different cities, and stores in Cosmic backend.

You may be asking how do I get the geolocations for my home address or work office. There several services that can convert a regular address to a geolocation, and vice versa. But the easiest way, is to open Google maps, and click on any point on the map. Then you will see down the bottom a geopoint of that location.

In the MapPanel vue component we are using vue-googlemaps to display Google map. All we have to provide is mapCenter, zoom, mapMarkers. We have a couple watchers to update the map. First is the selectedLocation which is triggered whenever the user selects new city from the SearchPanel. We are also watching for stores to populate the map with the markers, which display a little icon for each store within that location. We are also watching for selectedStoreto make the corresponding map marker highlighted. This is how we update the map view

And lastly we just need to add a couple events on map. The first event onMapMarkerClick to make the marker icon highlighted, and also make the corresponding store selected on the search pane. onMapMarkerMouseOverto add a little animation to make the icon jump up and down.

After you build your application and testing it, you need to add .env file to you root folder to have you application configuration, which look like something like this.

You also need to add start command to package.json script, which will be used by Cosmic hosting to start your application server. Once you update your Api keys, you can just build and deploy to Cosmic using the following commands

Now you can just go to Cosmic web hosting, and follow the instructions to deploy your application.

Adding Google maps to your application is fun and easy way to enhance user experience. Using Vue.js for this application was also big time saver. However with Cosmic I was able to have full stack application with server Rest Api with no additional coding. I think Cosmic is an owesome cloud platform, that can boost your development without extra coding.

I would love to hear from you

Lastly, I encourage you to go through the source code, try the application and let me know if you have any questions or comments below.

Cosmic allows developers to deploy their codebases to the Cosmic App Server for staging, testing and demo purposes, and is now offering new production deployment options available with some of your favorite deployment services.
Carson Gibbons
April 19, 2018
Read more

How to Build a Personal Music Site powered by Cosmic and Nuxt.js

Cosmic allows you to easily create nested structures and upload media files. We learn how nested structures are built and how you can fetch such data from Cosmic API to use in a simple music site app.
Sergey Ukolov
August 1, 2018
Read more

Cosmic has powerful content modeling and delivery tools to help you build apps faster, together. Cosmic lets you manage all your content, data and files and is unopionated as to the format of content you're uploading. The Cosmic Editor allows you to upload rich media such as video, images and
Carson Gibbons
July 13, 2018
Read more

Hi, In this tutorial, we are going to create an application that filters twitter tweets by selecting a specific location on the map. We are going to use React and Cosmic. We will be using Cosmic npm package for saving and sorting the most popular searches in our application. Let's get started.
Hayk Adamyan
January 10, 2019
Read more

Build a Blazing Fast Blog with Cosmic and Gridsome

How to Build a Landing Page with Angular and Cosmic [Template]

This article walks through an approach to build a web application using Angular and Cosmic to help generate marketing leads for your team.
Jamie Introcaso
October 8, 2020
Read more