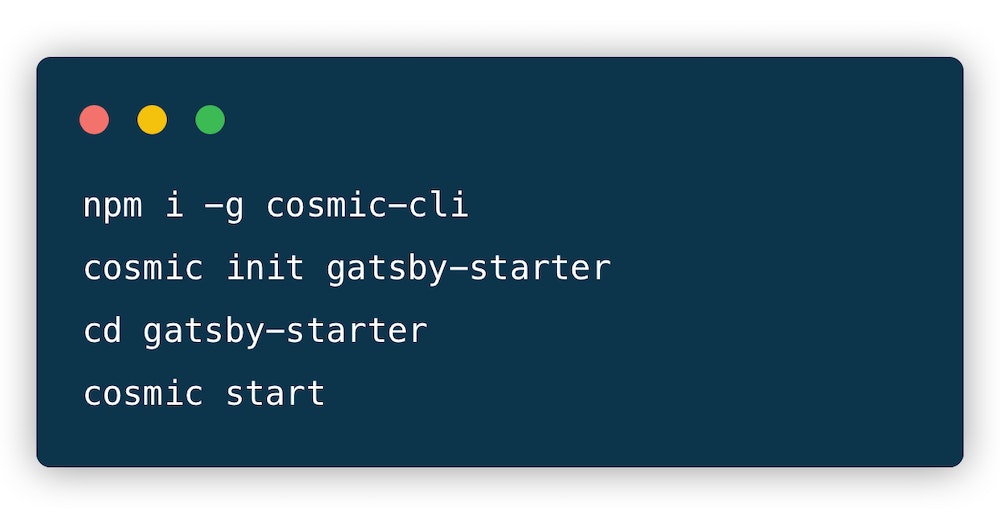 Using a headless CMS API has many advantages, namely time and ease of getting your application up and running while giving your cross-functional team the tools they need to get their job done. Cosmic enables content managers and developers to work better together. By providing an intuitive Admin Dashboard, powerful APIs, and flexible user roles, applications are built faster, more light-weight, and your whole team ends up saving time in the process. Developers can build applications using their favorite frameworks and programming languages, knowing they can integrate with any third-party APIs, databases or Static Site Generators.

A Static Site Generator (SSG) that has broken onto the playing field in a major way is Gatsby. Gatsby lets you build blazing-fast sites with your data, whatever the source. Gatsby loads only the critical HTML, CSS, data, and JavaScript so your site loads as fast as possible. Once loaded, Gatsby prefetches resources for other pages so clicking around the site feels incredibly fast.

Cosmic recently rolled out its Gatsby Source Plugin and its Gatsby Starter. The source plugin allows developers to easily fetch data into Gatsby from Cosmic, and the Starter App lets you get a Gatsby app up and running, connected to Cosmic for dynamic content changes in mere seconds. 😎  In this tutorial we'll quickstart a Gatsby application using the Cosmic headless CMS API.

Cosmic is an example of a robust headless CMS and API that's promoting collaboration on cross-functional teams to build apps faster. Get started building Cosmic-powered apps in seconds 🚀 We have Node.js, React, Vue, Gatsby and Serverless Starters to help you get your project started quickly.

Run cosmic -h for a list of all commands. Run cosmic [command] -h for details on options for a specific command. You're now up and running with a Gatsby Starter that can be managed entirely from your Cosmic Bucket Dashboard and Command Line Terminal tool of choice.

When ditching the installed content management system and going API-first isn't quick enough, check out the Starter Apps from Cosmic to get a project up and running in seconds. Cosmic integrates easily with Gatsby for an automated build process that allows you to maintain zippy static speed with dynamic content changes. 🔥

If you have any comments or questions about building React apps with Cosmic, reach out to us on Twitter and join the conversation on Slack.

Importing Data from Contentful to Cosmic

Looking to migrate from Contentful to Cosmic? The Contentful Importer makes it quick and easy.
Kevin Diem
February 3, 2020
Read more

How To Create An RPG Adventure Game using Vue.JS and Cosmic

See how easy it is to create a browser based video game when using Cosmic to manage all of your data.
Abey Joy
August 30, 2018
Read more

How to Deploy Your Codebase Using Cosmic

Cosmic makes it easy to deploy your websites and applications to the web. You can deploy an app from any git repository to the Cosmic App Server from any Bucket. Cosmic uses Dokku (Docker + Heroku-like deployment) to deploy your app from any GitHub, BitBucket or any other public repo.
Carson Gibbons
April 2, 2018
Read more

Cosmic is a fantastic headless CMS for powering your website, but if you write regular articles or often update site text, you might find it challenging to always come into the backend and make those changes (especially when you're on the go).
Karl Koch
December 11, 2020
Read more

Salesforce is the world’s leading enterprise CRM application. Zapier gives people internet superpowers by allowing them to connect and automate the apps they use. Using Zapier to connect your Cosmic-powered content with Salesforce is easy and requires zero coding.
Carson Gibbons
September 25, 2018
Read more