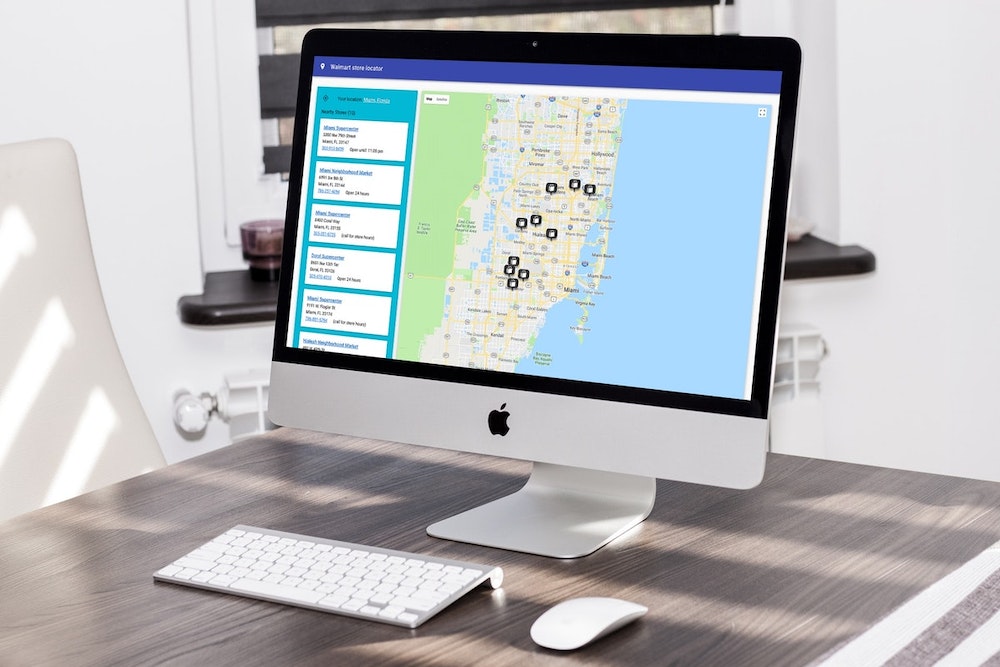 Cosmic offers a headless CMS that enables content managers and developers to work better together. By providing an intuitive Admin Dashboard, powerful APIs, and flexible user roles, applications are built faster, more light-weight, and your whole team ends up saving time in the process. Cosmic is unopionated about the content models employed, as well as the format of content Objects being managed. In this example blog we'll utilize Cosmic to quickstart a store locator built using Vue.js, Vuex and the Google Maps API.

To demonstrate how easy it is to get started with Cosmic, we'll utilize the Cosmic CLI to quickstart a Vue.js Store Locator built using Vue.js, Vuex and the Google Maps API. It will be locally downloaded to your command line tool and available to connect with your Cosmic Bucket Dashboard.

Cosmic is an example of a robust headless CMS and API that's promoting collaboration on cross-functional teams to build apps faster. Get started building Cosmic-powered apps in seconds 🚀 We have Node.js, React, Vue, Gatsby and Serverless Starters to help you get your project started quickly. There are over 70 app examples available in the Cosmic Apps Marketplace to speed up your project as well. Today we'll be using the Cosmic CLI to quickstart a Vue.js Store Locator. 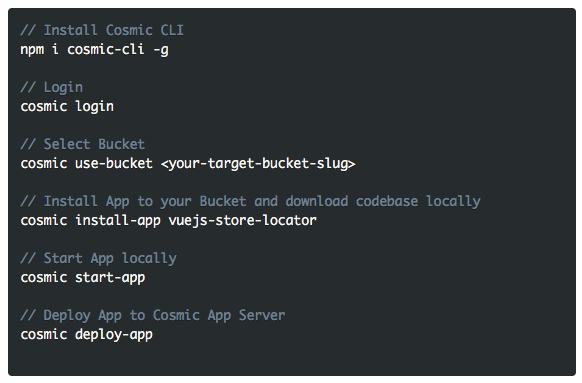 Run cosmic -h for a list of all commands. Run cosmic [command] -h for details on options for a specific command. You're now up and running with a Vue.js Store Locator that can be managed entirely from your Cosmic Bucket Dashboard and Command Line Terminal tool of choice.

I was able to easily install a Vue.js Store Locator using a headless CMS API that I can now use to manage dynamic content changes. When ditching the installed content management system and going API-first isn't quick enough, check out the Starter Apps from Cosmic  to get a project up and running in seconds. 🔥

If you have any comments or questions about building Vue apps with Cosmic, reach out to us on Twitter and join the conversation on Slack.

5 Advantages to Using a Headless CMS

This article will point out some of the advantages that a headless CMS offers. Hopefully, your pain point is covered in here or it sparks an idea for a new way of thinking about what you can do with a CMS.
Jamie Introcaso
August 7, 2019
Read more

An Object in Cosmic can be a page, a blog post, an author or anything you want it to be. Cosmic gives you the freedom to create and manage content openly and create your own data structure. Each Object allows for the creation of a title, slug, content and Metafields.
Carson Gibbons
April 3, 2018
Read more

How to Build a Single-Page Sales Funnel App using Node.js, Cosmic and Stripe

How to Schedule Automatic Backups in Cosmic

In addition to Import / Export Features and Revision History, Cosmic has added Automatic Bucket Backups to deliver even more peace of mind to you and your content editing team. To add daily Backups to your Buckets go to Your Bucket Dashboard > Settings > Backups.
Carson Gibbons
May 3, 2018
Read more

Getting Started with Cosmic CMS and Next.js

Next.js is a React framework for building hybrid applications. It's flexible, extensible, and works great with any data provider. In this tutorial, we'll show how to get started with Cosmic CMS and Next.js.
Lee Robinson
September 1, 2020
Read more