GraphQL vs. REST: A Quick Guide

REST was a big improvement over SOAP, providing greater flexibility in standardized data formats like JSON, and increased performance.

Now GraphQL has emerged to provide developers a new way to interact with data services; it's proved to be a very popular alternative to REST.

In this guide, we will show you the benefits and drawbacks of using REST and GraphQL to help you decide which is best suited for your development projects. 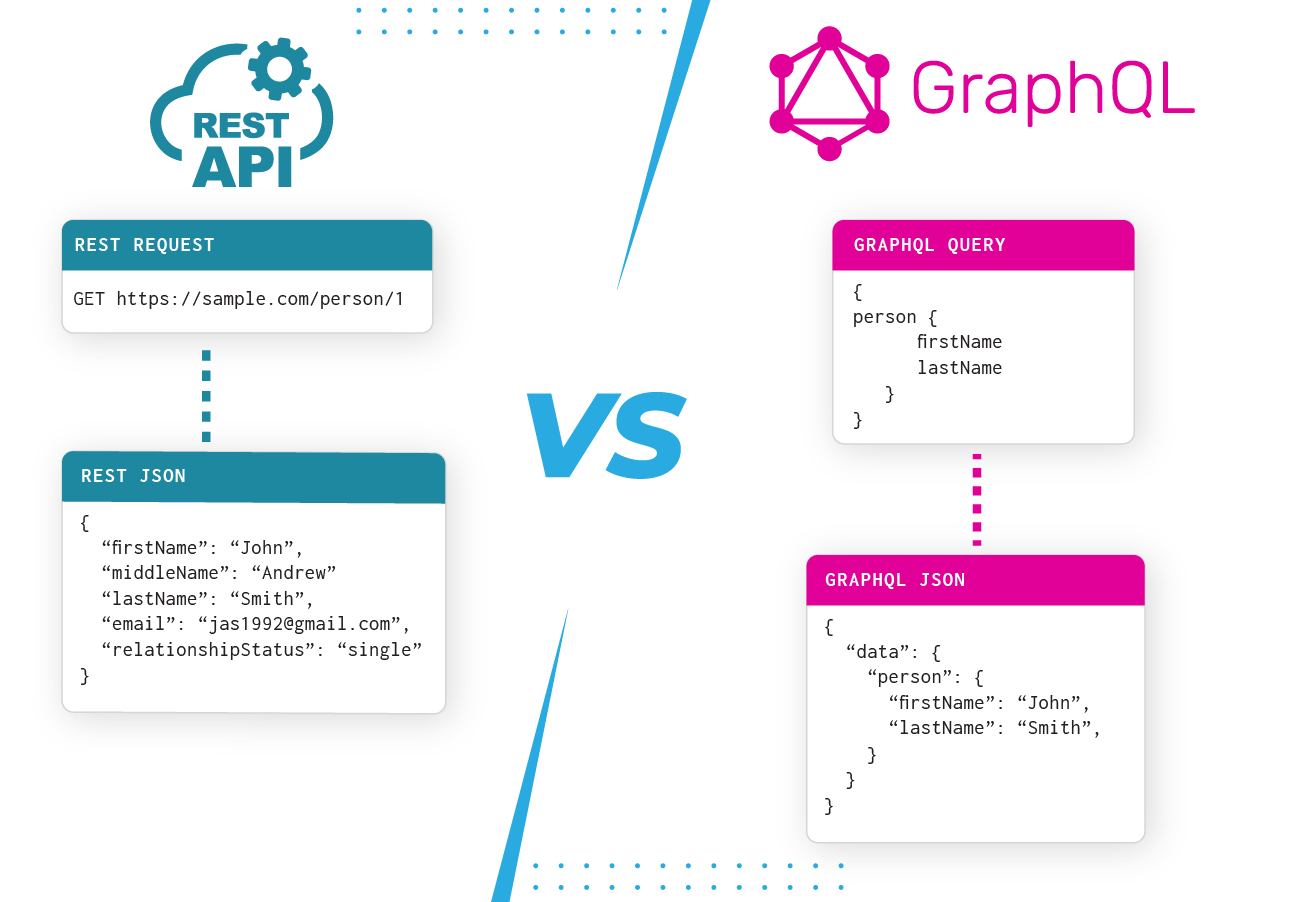 The Struggle for Standardization: GraphQL vs. REST

In the simplest sense, GraphQL and REST are two different ways to call functions over a network. Here’s a quick overview of each.

REST stands for Representational State Transfer. It’s an API design paradigm meant to standardize web services via a series of constraints and was created in 2000. In particular, REST is stateless and was built so that any compliant web service can interact with textual resource representations. In other words, using REST when building a web service makes it easier for clients and servers to understand each other even when one does not have knowledge of the other.

It also means that both the client side and server side can take an independent, modular approach to their evolution. As long as they follow the right format to send requests and responses, they’ll understand each other regardless of future code updates.

GraphQL is a relatively new API query language that was developed and open-sourced by Facebook in 2012. It’s designed to handle the complex, nested data dependencies found in modern applications. Specifically, it enables declarative data fetching to allow clients to specify exactly what data is needed from an API.

GraphQL was designed with efficiency and flexibility in mind with particular attention to how web services have evolved since 2000. Since it isn’t tied to any specific database or storage engine, developers don’t need special knowledge of the backend to use it. Instead, it can be applied anywhere an API is used, and it’s backed by the code or already existing data.

GraphQL vs. REST: What’s the Difference?

REST and GraphQL are fundamentally similar in that they both include the idea of resources with specific IDs. REST fetches data with GET and GraphQL uses POST, but they can both return JSON data in that request. They can also both handle many different types of resources and will ensure that a web API functions correctly for a given client.

Although REST has been the standard for a while, GraphQL has several advantages. It also has three distinct features that developers must consider before working with it. These are:

So, When Should I Use REST? When Do I Use GraphQL?

GraphQL and REST both have advantages that make them ideal in different situations. GraphQL incorporates a lot of REST elements but takes a more advanced approach. It’s also a favorite among many developers working with APIs.

Yet, projects still crop up where REST is better suited to handle things. In general, use REST when:

REST can accomplish the job beautifully in both of these cases. In contrast, go with GraphQL when a project must:

What GraphQL and REST Mean for Jamstack

Another key instance to consider the advantages of GraphQL vs. REST occurs when building a site using Jamstack. It’s an emerging architecture that decouples the frontend and backend, emphasizing client-side JavaScript, reusable APIs, and prebuilt Markup. The result is the functionality of a dynamic site with the advantages (load time, security, etc.) of a “static” one.

Both GraphQL and REST APIs can be used with Jamstack, especially when a headless CMS is involved. And while there’s no one right answer as to which is better here, consider the following:

Comparing GraphQL vs. REST? We’ve briefly covered some instances of when one might be more effective in a project than the other.

Ultimately, they’re two different ways to accomplish mostly the same things. REST is the older of the two. It enjoys more widespread support and infrastructure. In contrast, GraphQL solves some of the long-standing shortcomings of REST, especially by increasing the amount of control developers have over what data they call. These differences have implications when using architecture like Jamstack.

Luckily, Cosmic offers both a REST and a GraphQL API. If you are not ready to make the switch to GraphQL, or just prefer REST, the Cosmic REST API gives you GraphQL-like declarative data fetching using props. See the documentation for more info.

We've released some new features for the new dashboard that we are excited to share with you.

We are excited to announce our new podcast: Build Time, now available on your favorite content platforms.

We are pleased to share that we have expanded our global infrastructure to include coverage of more regions around the globe to ensure greater service reliability and performance.

Static sites are in the middle of a comeback - in this article, we cover everything you need to know about static site generators.

We have some exciting updates to share with you on the new Cosmic dashboard: global search and Object table filtering is now available!